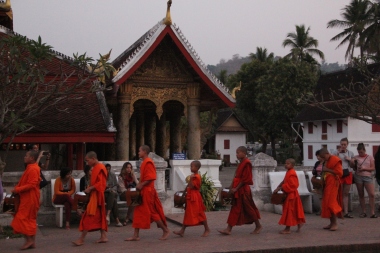 As we arrive in Luang Prabang at 5am, we get to witness the morning offering ceremony that takes place everyday in the city’s main street before the sun rises (for one time it might be convenient arriving early with a night bus). Monks residing in nearby temples walk along the streets of the town to collect offerings in the form of sticky rice mainly, from buddhist locals that line-up in the streets.

After a French-inspired breakfast, we find ourselves a tiny hostel close to the center and luckily get to check in at 8 am already. After a quick power nap we set off to explore the city. Luang Prabang is actually a very small town, mainly dedicated to tourism. Strolling in it’s charming little streets feel like a little time travel back to French colonial times. Some say it is the most beautiful town of south-east Asia. Although we well realise that over 95% of the building in the old town are either hotels in restaurants, we still enjoy the beautiful maintenance work that has been done to give this place such a charm.

The two ways of transportation in Luang Prabang

There are also plenty of temples to see, but we start getting a little “templed out”. 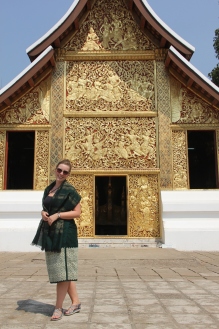 The following day, we gather some people in the street to share a tuk-tuk to Kuang Si Waterfall, one hour drive away. We have to do the usual half an hour of bargaining with the driver to get a decent price. We hatch a French-Estonian couple as well a an Argentinian mother-daughter duo that doesn’t speak a work of English (they admitted to us they were so panicked at the idea of organising a transportation by themselves that they had planned to spend the day in their hotel room).
The waterfall is a blast. Several natural little pools with a beautiful milky turquoise and jade colours stretch downstream over several hundred meters from the main waterfall that is itself very imposing.

We spend a few hours hiking around the fall and bathing in the pools. We even get a free fish-spa from dozens of little fish that come bite the dead skins off our feet as we dip them into the water. 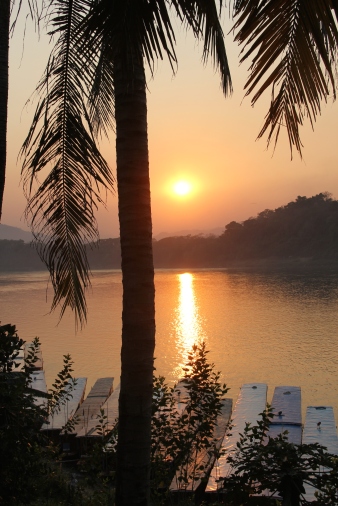 Bonus of the day: sunset over the Mekong

Food-wise, Laos is very convincing so far. Although we haven’t tried many dishes yet, we had some delicious noodle soups inspired from Vietnamese Phö and Thai Khao Soï. Also, as a former French colony, Laos will serve you some baguette and other french-inspired food. I guess there was at least one advantage at being a French colony instead of a British one… One special dish that we discovered is larb, minced meat or fish mixed with tons of herbs such as dill, coriander, chives, and parsley that you eat with sticky rice served to you in a little bamboo basket. 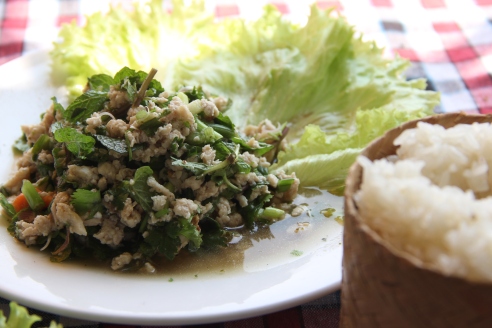 Another dish that we definitely like to try making at home are little pancakes called Khao Nom Kok (that are look-a-likes to the Dutch “poffertjes”) made out of coconut milk and rice flour. We can’t get enough of these little luke-warm treats. 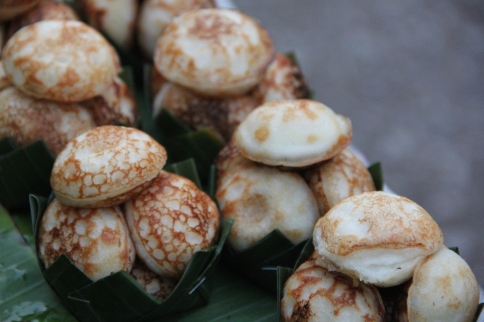 To get a bit of some cultural input for once, we enjoyed an outdoor cinema movie night that we can really recommend. One of the luxurious hotels at the waterfront plays the movie “Chang” every evening. When purchasing a drink you could enjoy the outdoor cinema for free and it was really fascinating to see. It is actually one of the first documentaries ever, and was filmed during 18 months in 1927 by the directors of King Kong before disappearing for about 60 years. It depicts the life of a Laotian family living in the jungle and their struggle to survive the fight against the wilderness – lions, tigers, elephants, etc. (see movie excerpt here).