*Disclaimer: We’re back in Switzerland already! Thanks for following our adventures until now! We will keep posting the articles for Peru and Bolivia, so come take a look from time to time 🙂 *

Done with the suffocating heat of Cartagena, we rode further north along the coast to Santa Marta and then up the jungly hills to an Eco lodge called Finca Carpe Diem.
Most travelers go to the village of Minca but after several travelers recommended it to us we opted for this lodge in the middle of nowhere, although geographically close to Minca national park. Getting there wasn’t all that easy as it entailed riding on the back of a motorbike with our big backpacks through steep dirt jungle paths… in the dark. After some rain. Well, once again, we made it 😉
It was all worth it though, as the finca had a nice atmosphere and offered several experiences close with the nature and the local farmers. We thus embarked on a cocoa journey by walking through the jungle for a little bit until we reached a cocoa farm where Horacio, the owner, took us around for several hours. He explained us that the white chocolate we eat in Europe is only flavored dark cocoa butter, never actual white chocolate (from white chocolate beans with purple insides). We knew this, but we didn’t know that white cocoa beans exists as well! It grows the same way, but can only be harvested once per year and is used mainly for pharmaceutical purposes (heart medication apparently). Its price is 5 times higher than dark cocoa. We also learnt that pink chocolate is not a new thing, it’s just when white and black cocoa flowers are cross-pollinated. That’s why you need at least 5km between white and black cacao plants, otherwise the pollinating insects mess it up.
Horacio grows dark cocoa only, but different kinds: sweet cocoa and semi-bitter cocoa. He also told us that with chemicals his trees could produce 5 times more fruits. We tasted the fruit itself and it was delicious! Apparently, cocoa was only consumed as a fruit at the beginning, before the Aztecs discovered the secret of chocolate – until it even became the common currency.

We finished the visit with a chocolate workshop and tasting, complemented with a cocoa face mask (Quentin’s moustache smelled like chocolate for days).

We spent the rest of the day relaxing by the pool (which had a stunning view over the jungle), bathing in a tiny natural jacuzzis, and hiking to the top of the neighbouring hill to view the sun setting behind the skyscrapers of Santa Marta. Finca Carpe Diem justifies it’s name after all! 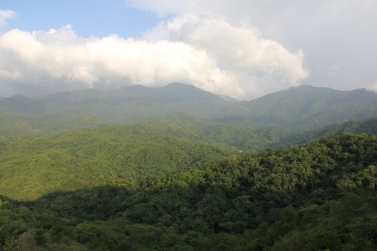 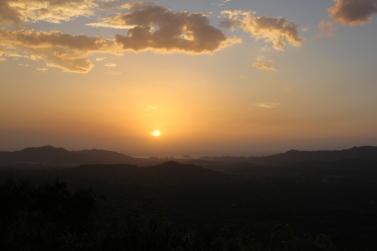 Next day was first a whole morning of planning/flights booking until we decided to head to the pool but that’s exactly when mother nature decided to send us a tropical rainstorm in the face. A few billions of liters later we gave up on the hills and took a jeep down the “road” to the coastline and the famous Parque Tayrona. We slept in an open bungalow perched on top of a hill (walking the way up from the reception took us 10 minutes but it was worth it) and enjoyed the great views over the surrounding jungle. We were even lucky to have the 12-bed dorm for us alone, so we felt like we had just booked a super fancy hotel with the best view!

Tayrona is a huge national park where means of transportation other than feet or horses are banned. As usual we opted for the cheaper option (#dutchroots) and walked through the park, which anyway made sense because it gave us the time to stop and enjoy the nature, composed of an extremely rough but beautiful sea, and a not-so-dense jungle populated by friendly monkeys (just beware the flying coconuts!). Other friendly beings around: we met Dirk and Elisa, a Dutch couple that we had already seen at the Finca Carpe Diem, and explored the park with them. The temperature was inhuman and the humidity even worse – after barely 3 minutes of walking we already felt like we were swimming in a boiling caldron. 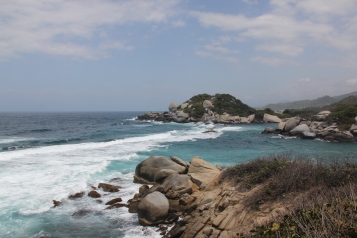 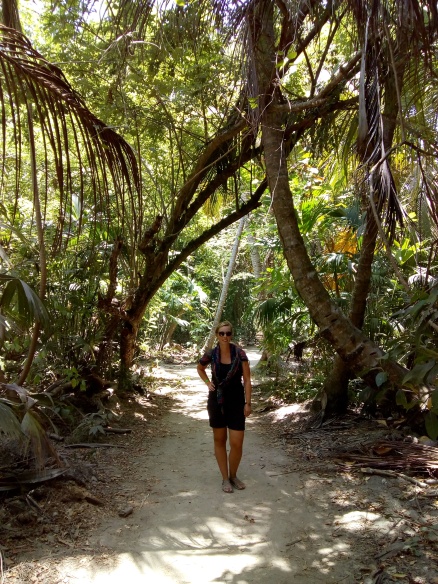 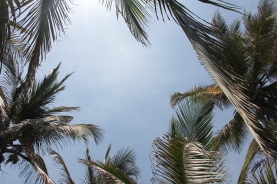 Also, the parc still remains the living space of indigenous communities, such as Kogis and Arhuacos. They have maintained most of their ancient culture and way of life although the clash of civilisation was obvious, especially when seeing them selling coconuts and orange juice to tourists.

A few hours later, we arrived at Cabo San Juan where we had planned to sleep in a hammock by the beach, but the girl in front of us got the last hammock… We were left with the option to sleep in a tent right in the sun (= slow cooking), sharing a mattress with sand flies and ants, or heading back for an hour to hopefully find another camping with hammocks. We opted for the second option and after some more suffering in the heat we could reserve our hammock and spent the end of the day lazying on the beach, playing in the waves, eating Dutch sweets (best moment of the day) and drinking self-made Cuba Libre. 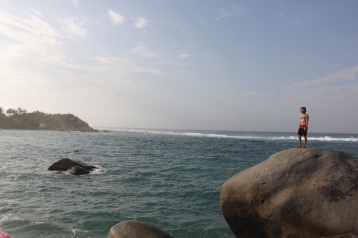 The night in the hammocks was unsurprisingly uncomfortable but at least we can tick that off the bucket list (even if it wasn’t there before), and we woke up close to the beach where we went for the last dip of our travels (yes, next will only be mountains).
Little extra for spider-lovers: we discovered that spiders’ eyes reflect the light of headlamps. This discovery was made as we walked through the jungle in the dark to get back to our hammock-home. We were wondering what were those millions of shiny silver dots surrounding us until we realised that there we small spiders e-v-e-r-y-w-h-e-r-e. Brrr

Our last two days in Colombia went by quickly although we took it slow in Santa Marta, relaxing in our hostel, eating some ceviche and going crazy because of all our mosquito bites.

Colombia was a fantastic country to visit: colorful and welcoming! We had some memorable encounters with the kindest people and filled our eyes with beautiful landscapes. Food-wise it didn’t make the top of the list (most things are deep-fried, so your typical lunch is a portion of rice covered with: fried banana, fried potatoes, fried pork belly, and beans…), but we discovered a few delicious restaurants that we can definitely recommend!

Next is Peru, and God knows we were looking forward to being 4000 meters high, where mosquitoes don’t exist!